Tropical Storm Bertha formed near the South Carolina coast on Wednesday, shortly before making landfall near Charleston. A Tropical Storm Warning is in effect from Edisto Beach to the South Santee River, and heavy rainfall is expected, the National Hurricane Center said.

The center said tropical storm conditions are forecast to continue near the coast over the next few hours.

"Bertha is expected to produce total rain accumulation of 2 to 4 inches with isolated totals of 8 inches across eastern and central South Carolina into west central to far southeastern North Carolina and southwest Virginia," it said.

The rain could lead to life-threatening flash flooding and aggravate ongoing river flooding.

Bertha is the second tropical storm to form this year before the Atlantic hurricane season's official start on June 1. Tropical Storm Arthur dumped heavy rain on the East Coast earlier this month after forming near Florida.

The Associated Press reports this is the sixth year in a row that a named storm has formed before June.

After it heads inland, Bertha is expected to weaken to a tropical depression later on Wednesday, according to the hurricane center.

SERVPRO of High Point responded to several calls for basement flooding over the past couple of weeks.

Sewage poses a very significant threat to human health.  Any time sewage is suspected, no matter the color of the water, all suitable precautions should be observed.  The severity will depend upon extent, content and degree of penetration. The health of technicians and occupants must take priority over all other considerations.  Sewage situations may be classified into three categories according to extent, content and degree of penetration.  The first situation exemplifies very little waste that originates in the built environment and is deposited or flows slightly beyond the confines of the sewage system. An example of this situation might be waste that overflows in a bathroom and is deposited on a tile floor.  The second situation is where the water and waste penetrates the structure or furnishing of the building. An example of this situation is when flooding occurs in the fourth floor men's room of an office building, flows under a wall and into the carpet of an adjacent hall.  The third situation is when waste has entered and mixed with other wastes from outside the immediate environment. The main line of the sewage system is backed up into the built environment where it is widely dispersed and penetrates the structure and the furnishings of the built environment.

Are you prepared for the upcoming cold weather? Cold weather can have a huge impact on your home or business if you are not ready for it.  From heavy rain and freezing temperatures to damaging winds, sleet,or snow, all can cause serious property damage.  While you cannot control the weather, you can take steps to be prepared and help take the sting out of winter weather.  You need to check your business property for downed tree limbs and branches.  Wind, heavy rain, ice and snow can cause branches to fall, which would cause damage to the property and potentially cause personal injuries. Also inspect walkways and parking lots, for proper drainage to alleviate a potential flood hazard.  Inspect all handrails, stairwells, and entryways to address and correct potential slippery or hazardous areas. Install mats or non-slip surfaces and post caution signs where water could be present.

Roofs, water pipes, and gutters should all be inspected to help ensure they are in working order. Gutter downspouts should be directed away from your home.  Clear gutters of debris that may have gathered during the Fall.  Leaves and other obstructions can cause a damming effect, which can lead to roof damage and interior water problems.  Protect water pipes from freezing by simply allowing water to drip when temperatures dip below freezing.  If pipes are under a cabinet, leave the cabinet doors open, allowing warm inside air to circulate around the pipes. Regarding outdoor faucets, consider shutting water off at the main valve in the basement or crawl space.  Once the valve is off, open the outdoor faucet to ensure it drains, preventing any remaining water from freezing in the pipe.

Thunderstorms form when an air mass becomes so unstable that it overturns (convects) violently.  "Unstable" means that the air in the lowest layers is unusally warm and humid, or that the upper layers are unusually cool, or oftentimes, both.  Pockets of rising near-surface air in an unstable air mass expand and cool, and as some of the water vapor present condenses into a cloud it releases heat, which then makes the air parcel even warmer, forcing it to rise still higher in the atmosphere.  If the lower level air is sufficiently warm and humid, and the higher altitude air is sufficiently cool, this process continues until a tall convective cloud - the thunderstorm - is formed. Thunderstorms can cause significant damage to property.  Homeowners know to call SERVPRO of High Point for any water or fire related issues.

If a home is destroyed in a storm that is later declared a disaster by the federal government and grants are made available, claims still need to be made through the homeowner's primary insurance company.  Policyholders should understand that their home insurance is their primary source of coverage.  Fema only pays AFTER insurance.  When Superstorm Sandy hit the east coast in 2012, FEMA determined that there was enough damage to make an "individual assistance" declaration and they provided grants to homeowners to help them with temporary living expenditures such as finding food and shelter.  The grants were not intended to rebuild their homes.  The best practice is to review your insurance policy with your carrier on a yearly basis.  This way you'll be current on what your coverage contains as it relates to the area where you live.

When storms hit, almost every homeowner affected files insurance claims immediately following the event.  This means that insurance company adjusters are inundated with claims, phone calls and questions.  Homeowners need to be patient with the process.  In addition, during catastrophes, insurance companies may send in large teams of adjusters to deal with the high volume of claims. Catastrophe adjusters are often not permanent employees of the insurance company but rather contractors who are hired on a loss-by-loss basis to handle weather disasters across a nation. For that reason, they may only be available for a short time.  They move on to other areas or go back home before claims are closed and then homeowners have to start again when the next group of adjusters arrive on the scene. Homeowners need to keep their own files and document everything so they won't have to start all over again when their file changes hands.

Hurricane Florence was a powerful and long-lived Cape Verde hurricane that caused severe damage in the Carolinas in September 2018, primarily as a result of freshwater flooding. Florence dropped a maximum total of 35.93 inches of rain in Elizabethtown, North Carolina, becoming the wettest tropical cyclone recorded in the Carolinas and also the eighth-wettest overall in the contiguous United States. The sixth named storm, third hurricane, and the first major hurricane of the 2018 Atlantic hurricane season, Florence originated from a strong tropical wave that emerged off the west coast of Africa on August 30, 2018. Steady organization resulted in the formation of a tropical depression on the next day near Cape Verde.  Progressing along a steady west-northwest trajectory, the system acquired tropical storm strength on September 1, and fluctuated in strength for several days over an open ocean.  An unexpected bout of rapid intensification ensued on September 4-5, culminating with Florence becoming a Category 4 major hurricane.

Hurricane Michael was the third most intense Atlantic hurricane to make landfall in the contiguous United States in terms of pressure, behind the 1935 Labor Day hurricane and Hurricane Camille of 1969, as well as the strongest Atlantic hurricane to form in the month of October since Hurricane Wilma. It was also the strongest storm in terms of maximum sustained wind speed to strike the contiguous United States since Andrew in 1992. In addition, it was the strongest storm on record in the Florida panhandle, and was the fourth-strongest landfalling hurricane in the United States, in terms of wind speed. By October 28, at least 60 deaths had been attributed to the storm, including 45 in the United States and 15 in Central America. Hurricane Michael caused at least $14.58 billion in damages, and at least $3.3 billion in insurance claims. 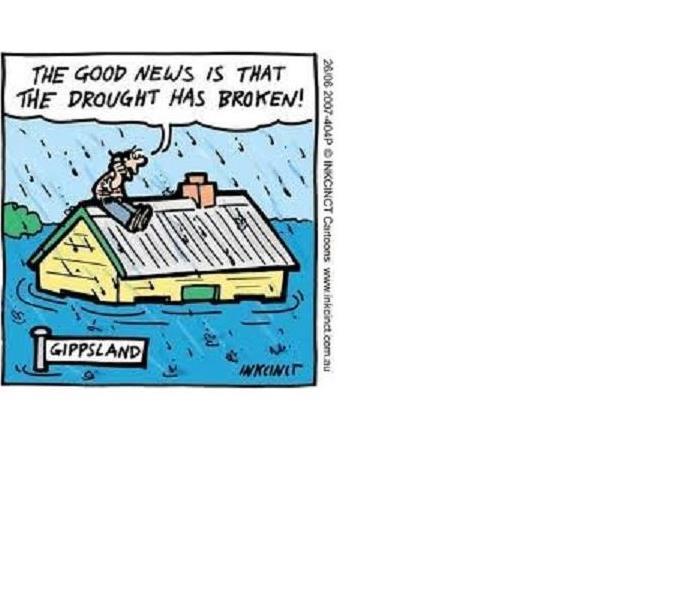 Before you end up on the roof waiting for a ride…make sure you are prepared for whatever happens.  We can help get life back to normal once the storm has passed but it helps to be prepared before it arrives.

In celebration of National Preparedness Month here is a list of recommended items for a basic emergency supply kit:

Make sure you are prepared for whatever happens.